In preparing for a Kickstarter campaign, I'm putting in a bit of work on two alternatives to the ...

In preparing for a Kickstarter campaign, I'm putting in a bit of work on two alternatives to the "desktop" spectrometer we've been working on. The first is a mini spectrometer attachment for an Android phone, but not the rigid one which we're trying to 3d print. Rather, this is a cheaper, simpler fold-up one made from paper or black styrene plastic. I'm trying to get it small enough to print and ship as a postcard, which we could get out the door to Kickstarter backers almost immediately. The above is the second draft of this design. (design files coming soon, i haven't drawn them up yet)

Second, I'm working on a "countertop" model which is kind of hardened, has a sturdy stand and would come pre-calibrated, and would cost quite a bit more. It's intended for coffee shops, wine bars, classrooms, anywhere you want something little more rugged and less hacked together. I'm thinking PVC may be a way to do this tidily, but feedback from folks at the p.irateship (my workplace) is that it still looks a little too "DIY" and that I ought to at least use nicely matched materials. I wonder if I can order colored PVC? 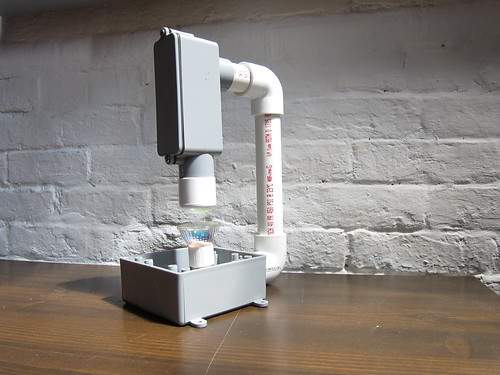 megan commented over 8 years ago

You can get black pvc, called ABS, I used it in a project last year. Some places are discontinuing making it, so you can get it super cheap.