What I want to do re-make the faucet cover rig for infragram, using the same kind of parts. My ...

re-make the faucet cover rig for infragram, using the same kind of parts. 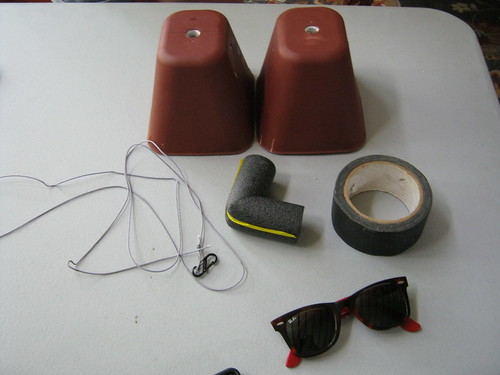 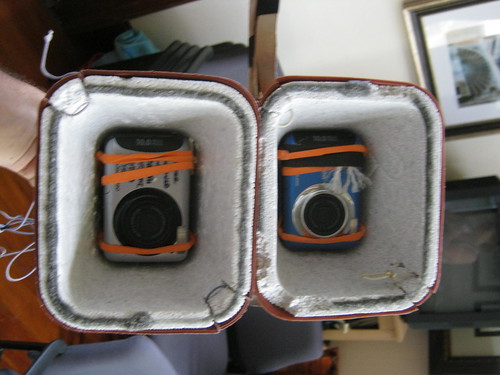 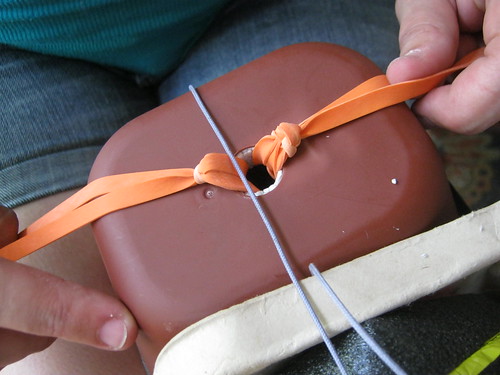 Here, we show the knots that keep the camera snugly in the unit. a490s are a bit bulkier than the 1400s we sometimes use. It's thought that that makes a more snug fit, resistant to changing the camera's orientation while in a bumpy flight. 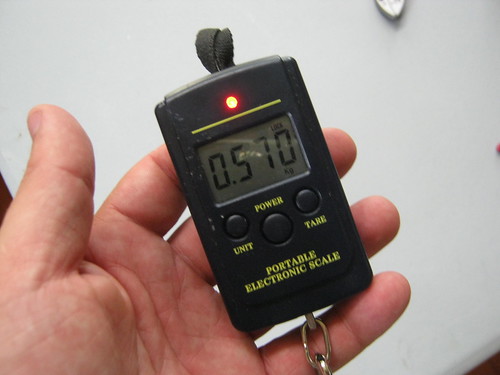 I would like to map wetlands in infragram. so far, i only have the kind of IR camera that was hacked with an exposed piece of film. we'll see how it works. 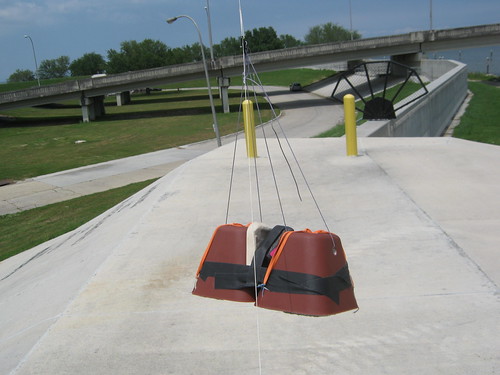 Scott,
It doesn't look like you have any electronics for triggering the cameras. Do you have plans for syncing the shutters? If the synchrony is not very close, there will be reduced overlap between photo pairs which leads to rather unproductive alignment of the pairs.

I think you should try a Titan 2 Rig. I bet if you included all of the tubing bumpers it would almost float. Add a couple pieces of styrofoam and it will bob like a cork (albeit with cameras attached to it). It looks like you have a single line attachment to the kite line, so you could also benefit from a Picavet. Just think, no more spinning, much less swaying, more vertical photos, and both cameras are firmly attached, aligned, and lanyarded to the rig before you turn them on and make sure they are operating as desired.

I think there are three of the Public Lab MakerBot printers in NOLA. Surely you can get a Titan 2 Rig and Picavet printed up for you.

thanks, Chris! definitely need help on syncing cameras. on their own, the cameras fire at different rates. The overlap has been a challenge, it's true.

need to work that out before i tackle the whole 3D printing thing.

I think i will finally look at CHDK...

Scott,
CHDK will provide a better intervalometer, but it can't sync the shutters without an external signal. So you need something to send a 5v pulse to both cameras simultaneously. CHDK can help by responding to the pulse by preparing to shoot (focus, exposure, etc) and then wait for the next pulse to fire both shutters at exactly the same time. So you need 4 AAA batteries, a timer, and a USB Y cable. This might be the cheapest solution: http://publiclab.org/notes/cfastie/7-12-2012/shutter-timer-upgrade. I might assemble a couple of these.

Scott,
If you still have that RC controlled KAP rig, there is another option for syncing the VIS and NIR cameras in your dual camera rig. The radio receiver that goes on the KAP rig outputs a signal that will trigger the shutter. You need CHDK on the camera so it knows what to do with that signal, and the only other thing you need is a Y cable to split the signal from the receiver to the two cameras. Then you can trigger both cameras simultaneously from the ground by sending two pulses a few seconds apart (one to get ready, the second to shoot).

500 notes
created by eustatic over 8 years ago

376 notes
created by eustatic over 8 years ago

45 notes
created by mathew over 5 years ago