This imagery was contributed by Adam Griffith on behalf of the Program for the Study of Developed...

This imagery was contributed by Adam Griffith on behalf of the Program for the Study of Developed Shorelines, Western Carolina University

Adam Griffith, of the Program for the Study of Developed Shorelines at Western Carolina University, conducted several Gulf of Mexico aerial overflights and shared aerial imagery with the mapping project. 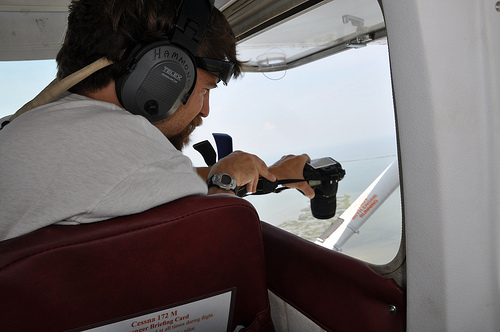 The flights were typical of DIY Cessna imagery collection. The Camera is held in approximate “geodata position” by a rubberized cabinet clamp. The camera operator stays quite busy though by holding the rig to dampen vibrations, shooting images, and communicating with the pilot. All this is happening with the window wide open and the plane travelling 90-150 MPH, making it quite noisy in the cabin.

Here is a great video of Stewart Long actually stitching these images together into a map in Photoshop. He later used GDAL to georectify it:

warren commented about 9 years ago

I added a timelapse video of Stewart stitching this map together -- it's amazing to see the process occurring before your eyes. Make no mistake, it took hours.